But I’m against giving your kids chores.  The whole word “chores” just sounds awful. On the other hand, “work” was given to man as a blessing.  It was established before sin came into the world. 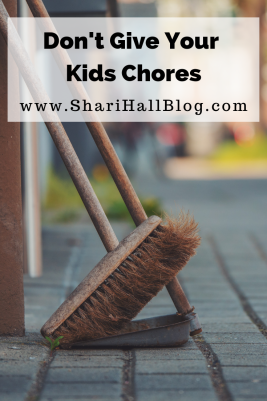 I know…it’s a crazy idea.  But I’m against giving your kids chores.  The whole word “chores” just sounds awful.

On the other hand, “work” was given to man as a blessing.  It was established before sin came into the world.  In Gen. 2:15 it says, “Then the Lord God took the man and put him into the garden of Eden to cultivate it and keep it.”  Prior to the fall, man was created to tend and nurture the ground.  Now sin brought with it thorns, which made work hard.  In Gen. 3:17-18 shows that because of sin the ground is cursed with thorns and thistles and by the sweat of our face we shall eat.

You see, it’s good for our souls to work…to cultivate…to nurture.  There are a number of prisons in America now that have prisoners planting and tending gardens to produce their own food and also raising future guide dogs for the blind.  What authorities have found is that these hardened criminals begin to change when they have something to nurture.

Work is a gift from God.  It gives us purpose and can define our gifts and talents.  We add value to the world because of our work.

When my son was six and my daughter was four years old, I was at the Beach Boardwalk in Santa Cruz, CA.  We were having a beach day with a few other kids and moms.  We told the kids they could have two rides each and then we were going to go home.  All of the kids rallied together and began to demand a day-long wristband.  We immediately whisked the kids away into the cars.  I told my children that if they wanted a day-long wristband that they could work for it.  (I’m not saying that buying children a day-long wristband to an amusement park is a bad thing.  It was the attitude of demand that I was addressing.)  The next day we made chocolate chip cookies and put 4 to a plate.  I sent them down the road with a little red wagon (and me in tow) to go door-to-door selling their cookies for $1 per plate.  Of course, they were so adorable nobody could say no.  They soon had their $20 each to purchase their day-long wristband.  What really surprised me was a comment my son said on the way to the Beach Boardwalk the next week.  He was looking out the side window and not really speaking to anyone in particular and said, “I am soooo proud of myself.”   I thought to myself that I could have taken away a sense of accomplishment and created entitlement by handing him a twenty-dollar bill.

Now, please hear me.  As parents, we can go too far on this pendulum and make them work for everything.  This can have a damaging effect as well.  It is good to sometimes give your children good gifts.  And at six and four years old, I didn’t get into deducting the cost of all of the ingredients or talking to them about taking taxes out of their profits.  We need to gauge where our children’s hearts are at and talk to them about the goodness of working.

But, of course, as with everything else, it starts with our attitude about work.  Do you speak about the dread of going to your job?  Or do you look at your work as a place to cultivate it to make it the best it can be? Do you look at your home as a domain to nurture and care for?

Don’t just give your kids tasks to do so you don’t have to do them and don’t make working a miserable experience for them.  Give them a sense of dominion or ownership.  Help them to cultivate their rooms and help them to see beyond the task to the greater purpose.  Also, talk to them about your sense of purpose in your work.  (And if you struggle here, it’s a good time to make a few changes in your own life.)

Calling them up means to believe in their capabilities.

When my daughter was an infant she sucked her thumb non-stop.  I had been told this would be a difficult thing to help her to overcome.  Many parents had gone before us and battled this with much frustration.

My husband, in a stroke of brilliance, sat down with her and said, “Michelle, you are now two years old.  You are a big girl and big girls don’t suck their thumbs. That’s for babies. You are no longer a baby, so as a big girl we’d like you to stop sucking your thumb.  Can you do that?”

Now, I must confess, I was standing behind them and I rolled my eyes.  I did. I did not believe. I thought, “oh, so you’re just going to ask this two-year old, who has been sucking her thumb since day one, to just stop.  HA!”

Now, this is NOT an article on how to get your kids to stop sucking their thumbs.  I really don’t think this would work on every child. It may not work on ANY other child…ever!  But I did learn something that day. I learned that most children want to grow up; little kids want to be big kids, big kids want to be teens, teens want to be adults.  So, as parents, we can use that to our advantage.

One of the best things parents can do is to tie privilege to responsibility.  Rewards should be tied to responsibility and/or skilled growth, not behavior. For instance, a child can be given the reward of an hour of television because their room is cleaned and homework done, not because they didn’t throw a temper tantrum at the store.  When rewards are given for behavior, they learn quickly how to blackmail you…it’s kind of human nature.

When rewards are tied to responsibility it means you can often say yes to their request. When a child asks, “can I watch t.v.”, a parent can say, “yes, as soon as your bedroom is cleaned.”  My daughter asked, “Mom, can I have a car?” I said, “Yes, as soon as you can afford it” (hoping it would buy us another 6+ months of driving maturity.)

So often, I found that when I didn’t tie it to responsibility it was because it was convenient for me.  I either didn’t want to deal with getting them to take responsibility or I wanted the convenience of just giving them something.

Good behavior should somewhat be expected.  So if they throw a temper tantrum or stomp out of the room, this is a violation of relationship and the relationship needs to be repaired through owning behavior, confession, and making amends.  To offer a reward or privilege for them to not misbehave means they get to up the ante whenever they want something.

However, one way you can tie behavior with privilege is through the loss of privilege if they don’t behave instead of telling them they are being a ‘bad boy.’  For instance, “because you hurled your toys, I will need to put the toys away until you can be responsible with them.” This is a natural consequence and calls them up into maturity.

What do I mean by ‘calling them up’?  Calling them up means to believe in their capabilities.  Tying rewards with responsibility teaches them about the real world.  If you want a child to wake up with a decent attitude and get themselves ready for school, let them know that this is a part of being a mature person.  Instead of, “Johnny, are you ready? Johnny, get up. Oh my gosh, Johnny, I can’t believe I have to tell you again!! GET UP!!!” You can say, “You know, I think you are getting old enough to get yourself ready in the morning without a lot of help. It’s a pretty grown up thing to do.  Do you think you are ready?” When they have done it for a few weeks, then bring on the rewards by allowing them to stay up for a half hour past their brother and read books in bed. Or better yet, offer the reward of telling some of your friends how mature Johnny is now that he’s responsibly getting himself ready in the morning.  Praise goes a long way. If they are not able to do the task, let them know that it’s ok to not be able to do it, and you can work on one aspect of getting themselves ready like brushing their teeth on their own every day. Calling them up says, “I think you are capable.”

Now, everything needs to be balanced.  This is a guideline, not a rule set in stone that can never be broken.  Think through what your child needs in a given situation and use wisdom.  Sometimes they just might need a blessing out of the blue and for no reason.  Sometimes you just might need a break to regroup so you don’t lose your mind. Some kids may like being babied and need another strategy all together.  Just be aware of what you are communicating to a child. Also, realize every child matures at a different rate and in different ways, so we can’t really compare and contrast our kids.

The goal is to know your child, see where they need to grow in responsibility and call them up.

God, Grant me serenity to accept the things I cannot change, the courage to change the things I can and the wisdom to know the difference.  Living one day at a time, enjoying one moment at a time, accepting hardship as a pathway to peace, taking as Jesus did, this sinful world as it is not as I would have it, trusting that You will make all things right if I surrender to Your will so that I may be reasonably happy in this life and supremely happy with you forever in the next.  Reinhold Niebuhr (1892-1971)

Shari Hall is a on-line Biblical Mentor who concentrates on working with those who struggle with addiction, abuse, depression, grief, and codependent relationships. For more information regarding on-line services, go to www.projecthopeidaho.org, click ‘Ministries of Project Hope’ tab and the ‘Mentoring Services’.